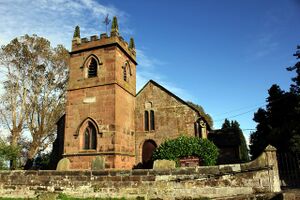 From medieval times parts of both Hoole and Newton were in the ecclesiastical parish of St. Peter’s, Plemstall Church contains memorials to many notable local families e.g. the Hurlestons and the Brittains, and the Victorian grave of Martha Hamilton is prominent in the churchyard. The records from there of Births, Marriages and Deaths illustrate its use by the residents of Hoole and Newton, and its location is a reflection of the days when both of these areas were linked with Wimbolds and Mickle Trafford, and Dunham on the Hill.

Nearer the City, Hoole was eventually located in the Parish of St. John, and Newton in the Parish of St. Oswald, which was the Cathedral Church, and the registers of ceremonies carried out at each by local residents show their allegiance to them. Arguably the Cathedral was the pinnacle of recognition, with family vaults, the endowment of a chapel (Martha Hamilton), and the installation of plaques and memorials (Hayes family at Hoole Bank House in recognition of their son killed in World War 1; Edward Evans-Lloyd of Plas Newton). The first service of the Flookersbrook, Newton & Hoole Female Friendly Society was held in the Cathedral in 1818.

Miss Carver's school listed with the 'Establishment' schools of Chester 1858

At the beginning of its urban development arguably more appears to have been done to promote religious values and worship in Hoole by Miss Jane Carver at her School in Faulkner Street (1857 onwards) than by the established Church. Her classes, eventually for adults as well as children, were clearly the basis for persuading the Marquis of Westminster to build his Schools in Peploe Street where, in addition to the usual school syllabus, non-denominational religious education was taught by some 21 volunteers. 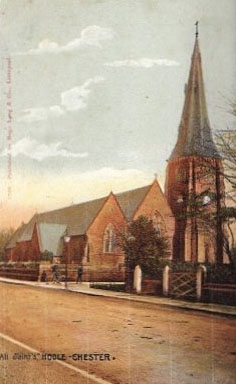 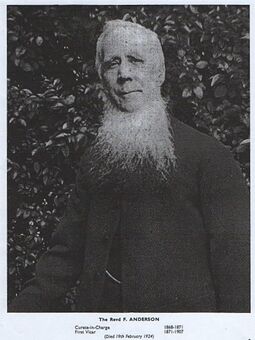 During the remainder of the 19th Century, the Church established itself into the expanding community of Hoole and the way it dealt with the controversial issues of the time make interesting reading. One of its main concerns was that Westminster Road Schools were non-denominational and the Rev. Frederick Anderson, who was responsible for All Saints for its first 49 years, sought to remedy the situation.

Eventually in 1893 the then Duke of Westminster agreed that the Schools’ Management Committee should be drawn from members of the Church of England and it became a National School - the Westminster Road Schools. At the same time, the Duke agreed to finance the extension which opened in April 1895.

The non-conformists who had managed the Schools for 30 years built the Tin Chapel in Walker Street and worshipped there. It became the Congregational Church.

In the second half of the 19th Century non conformism locally was, not unsurprisingly, linked to what was happening in Chester, and from the 1880’s lists of service venues similar to the one reproduced from 1891 appeared weekly. 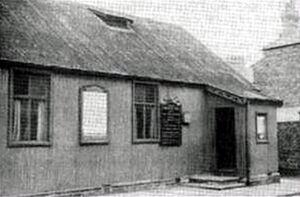 The last name on the List was the non-sectarian service run at the Westminster Schools. When the Church of England took over control of the Schools, the non-sectarian body became the Congregational Church erecting the Tin Chapel in Walker Street in 1894. This was later renamed the ‘United Reform Church’ and moved to new premises on Hoole Road in 1958 - the Hoole Congregational and United Reform Church. 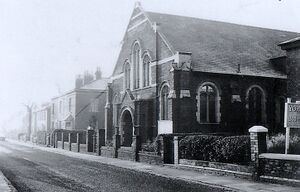 Methodism came to the area in June 1866 when the National Primitive Methodist Conference held its “Camp Meeting” in the Folly Field – an annual event repeated over the next 10 years. Newspaper reports suggest that thousands of people attended these rallies where 3 or 4 carts were put in various parts of the Field to act as pulpits. It was however the Wesleyan Methodists who by 1876 had set up a Society in Bishopsfield. In August 1888 they rented a shop for religious worship which proved too small and a chapel of wood and iron was erected in School Street. This closed in 1893 because the Primitive Methodists were about to erect a more substantial chapel in Hamilton Street. The latter chapel became the school room of the Methodist Church we know today which was eventually opened in 1928. Methodism in Hoole and the Church in Hamilton Street. 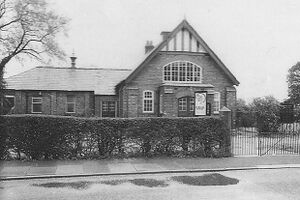 Late in the 19th Century, a group described as non-denominational began to meet in a building behind James H. Bentley’s farmhouse on Hoole Road, near where the A55 and Motorway roundabout is now. The five families involved acquired a plot of land in Pipers Ash which was then in Hoole and on 16th September 1891, three foundation stones were laid for a small Chapel which was to be a part of the George Street Methodist Church; the names on the stones were Mrs. Beresford Adams, Mrs. Carter of Lea Hall, and Mrs. Thomas Hales.

The Chapel prospered and in 1914 a larger church was built, the Chapel becoming the School Room. The new church had twenty foundation stones, the names upon them luckily being preserved in the Cheshire Record Office.

James H. Bentley, in whose farm the group first met

Between the two World Wars, the Church continued to thrive reflected by a Sunday school attendance of up to 100 children. Account books between 1892 and 1932 show income from lectures, entertainment, Good Friday efforts, harvest festival sales and in one year, £1.18s 6d from carol singing. 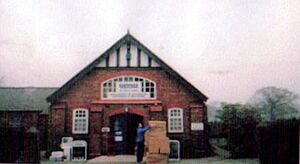 Pipers Ash became something of an isolated community, the Chester Bypass (A41 dual carriageway) being constructed in the 1930’s separating it from the Hoole Lane area. In 1965, Queen Street Congregational Church (the frontage of which is now part of Tesco’s, Frodsham Street site) moved from the City centre to Green Lane, Vicars Cross and became 'The United Reform Church’ attracting worshippers away from Pipers Ash.

The dramatic fall nationally in attendance at church and chapel began what became a terminal decline in the Pipers Ash congregation. The Sunday School closed in 1978 and although it re-opened in 1984, it attracted only a dozen children and the congregation was eventually reduced to fewer than 20 elderly members. When 2 of the members died whose knowledge and skills had kept the fabric in good order, it was agreed that the church was no longer viable, and the last service was held on 17th June 1993.

The premises were used for some time by a packaging company who moved to an industrial site in Waverton. The church was demolished in 2015 and houses built on the site. 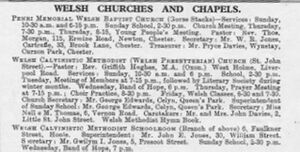 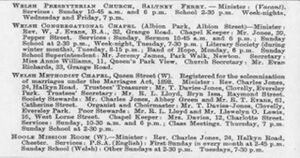 When Hoole expanded in the latter part of the 19th Century many Welsh people came to live there. Chester of course, in spite of its love/hate relationship, was the home of many a Welsh person and the following list shows the provision made for them to worship. 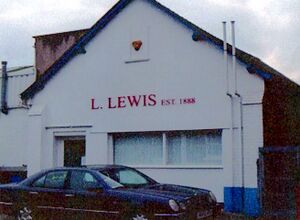 The Hoole Welsh Wesleyan Methodist Mission Room at the end of the list was built as a Sunday School on the West side of Peploe Street at the end of the terrace of houses erected in the gardens of Egerton Terrace in 1904. During the previous 4 years, meetings had been held over a baker's shop in Charles Street and then in a room at the back of Sumpter's Pathway. It was linked to the Welsh Methodist Chapel in Queen Street and its Minister Rev. Charles Jones lived at 24 Halkyn Road. Interestingly, there was a service in English. During World War II, All Saints Mission Room which was opposite, was used as a British Restaurant and arrangements were made for the Welsh Mission Room to be used by organisations (Boys Brigade, Guides and Brownies) which normally met at the former. 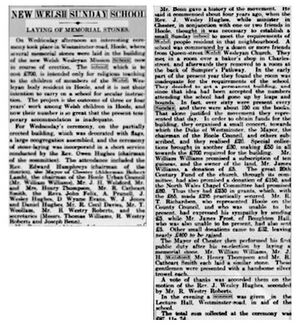 Laying of the Foundation Stones - November 1904

When it closed in 1947, the Welsh Mission Room became (after a petition otherwise) a part of Bramhall’s Garage which eventually became Bill Smith’s motorcycle premises. 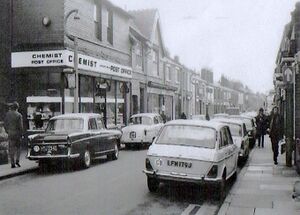 Further up the list there is another location in Hoole, Welsh Calvinisitic Methodist Schoolroom, at 6 Faulkner Street which was linked to the Church in St. John’s Street. No.6 was a doorway between the shops and the School met above (Sunday schools were for adults as well as children). This block of shops (now Boots etc.) was built by James Freeman Fletcher in the garden of his property, Upton View, now Costa Coffee. The Superintendent and Secretary lived in Hoole and were both named Jones. The School opened in January 1901 and annual concerts were held to help finance it at St. John Street Church. 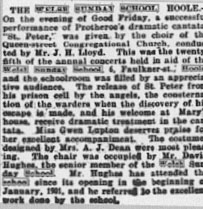 The Chapel appears in the 1911 Census with a resident, and was still a place of worship in the 1950’s. 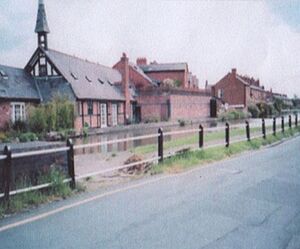 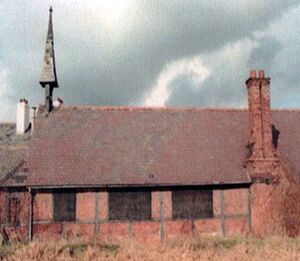 At the other end of Hoole Lane a Mission Chapel of St. Paul’s Church, Boughton was built in the 1880s by the canal lock to the design of John Douglas. It was in use until 1933 and after it closed it was used as a bakery by T. Price & Sons from Duddon, who had a shop opposite. The Hoole Lane Mission Hall was more recently developed as accommodation with the name ‘Mission Mews’. 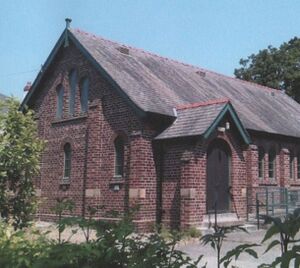 In 1928 the New Church which encompassed the Swedenborgian religion was built on the corner of Brook Lane and Dicksons Drive. This faith was based on the teachings of Emanuel Swedenborg in the 1750s that each person must actively co-operate in repentance, reformation and regeneration of one’s life. God had explained the spiritual meaning of the scriptures to Swedenborg to reveal ‘the truth’ about the second coming of Jesus Christ. The Church on Brook Lane was very active particularly in the 1950s and 60s. It closed in 2017. 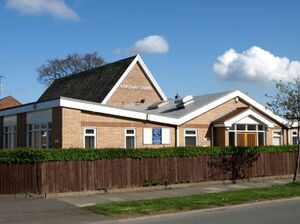 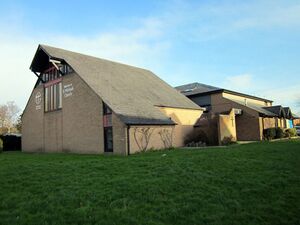 The Congregational Church at the Tin Chapel became the United Reform Church and moved to their new premises in Hoole Road in 1958. By then, the housing development in Newton had led to a significant increase in the population; in 1957, Kingsway Chapel, an independent Evangelical Church was opened and in 1962, St. Michael’s Church (of England) was built in Plas Newton. 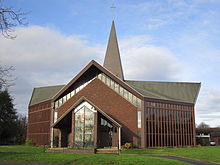 Since the emancipation of Roman Catholicism, Hoole and Newton worshippers have been in the Parish of St. Werburgh, their Church originally opening in Queen Street, Chester in 1799, before moving to a new building in Grosvenor Park Road in 1876. In 1964, St. Columba’s Church was built in Plas Newton. St. Werburgh’s and St. Columba’s Catholic Primary School is located in Lightfoot Street. 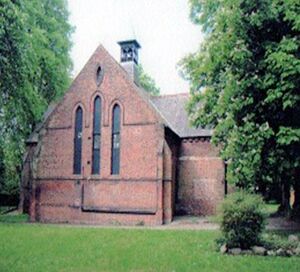 When the Workhouse was opened on Hoole Lane in 1878, St. James’s Chapel was built in its grounds; its first Minister was the Vicar of All Saints Church, Rev. Frederick Anderson. It contained the only graveyard in Hoole, used for the unfortunate occupants of the premises. Between 1880 and 1900 the deaths of 1,350 people were recorded in the Burial Register and by 1900 not surprisingly, the burial ground was full. When the Workhouse became the Chester War Hospital in 1917, services were held for both patients and staff in St. James’s Chapel. The building still stands today. Overleigh Cemetery has been the final resting place for most of our citizens since it opened in 1850.

It would be easy to forget how important the early Sunday schools, the young people’s organisations, the fellowships and clubs, and most of all, the Christian beliefs of these religions were, and still are, in the life of Hoole and Newton’s communities.

The Society would be glad to see and copy any records, memorabilia or photographs relating to any of these Churches or Chapels.

Retrieved from ‘https://www.hoolehistoryheritagesociety.org.uk/w/index.php?title=Religion_in_Hoole_%26_Newton&oldid=1754’
Cookies help us deliver our services. By using our services, you agree to our use of cookies.