Where it all Began[1]

The Hoole Ladies Bowling Club has in its possession its first Minute Book starting in 1947. On the inside of the cover, it reads:

The first meeting of the Club was the AGM, held on 7th October 1947, at the Park Lodge. The minutes state that the minutes and treasurers report were read and passed but there is no record of a previous meeting in the Club’s archive. Mrs Nicholson was elected President, replacing Mrs Payne who was the retiring president.

On the agenda was the proposition to ‘separate from the gentlemen’. This was agreed unanimously along with ‘the annual subscription should be paid to our own club funds and hence be known as ‘Hoole Alexandra Park Ladies Bowling Club’. The entrance fee was proposed at 3s/6d but amended to 3s/- and members limited to 40, with only 10 from outside the district. Officers and committee members were elected, and Thursday was chosen for bowling day. The following activities and games were agreed:

The Club now plays every Tuesday afternoon during the Season and uses Green No.3 on Panton Road. Elsewhere in Hoole History and Heritage Society web pages the history of the opening of Green No.3 is documented. Hoole Ladies first discussed using Green No.3 in October 1949. Previously Green Nos.1 and 2 in Alexandra Park had been used. The AGM held on 25th October 1949 read ‘It was decided we should try and arrange for No.3 Green for all matches and games and that Tuesdays be arranged provisionally for club day and matches to be played on a separate day.’ It was also agreed that practice matches are played in the evening. Therefore, it seems that Green No.3 was available for the 1950 Season although the General Meeting held on 24th January 1950 noted that we would not be able to use No.3 Green after 6pm and it was decided to apply for No.2 Green for Home matches.

Hoole Ladies used No.3 Pavilion for their 1951 AGM, and it was noted that the Bowling Day was fixed for Tuesday. At the AGM after the 1952 Season (8th October 1952) it was agreed to keep Tuesday at Club Day. However, this AGM was held at the Elms Pavilion and the Club used numerous venues for their meetings over the years. At the General Meeting held on 30th April 1953 it was agreed almost unanimously to use No.3 Green. As to the Bowling Day this seemed to change. At the AGM held on 12th October 1955 it was decided to change Bowling Day to Thursday but by the AGM held on 23rd October 1957 ‘Bowling Day to be left at Wednesday’.

Although the Clubs use of Green No.3 on a Tuesday afternoon is now established there had been some disagreements early on. At the Committee Meeting held on 18th May 1960 the minute read ‘Disappointment was strongly expressed at the refusal to allow members to play on Green 3’. The secretary was asked to write to Mr Williams, the Park Superintendent, over this matter and to enquire regarding terms for use of it for 2 hours. However, at the committee meeting held the following March (15th March 1961) it was reported that the Park Superintendent would put to the Park Committee their request for 2-hour slots instead of 4-hour slots at a reduced fee for using Green No.3. The Superintendent also gave the Club consent to use Green 3 for club meetings on a Wednesday afternoon. The Club, at their 28th March 1962 General Meeting noted their appreciation to Mr Williams for the use of Green No.3 for club meetings. In April 1962 (11th April 1962 Committee Meeting) the Secretary was asked to write to Mr Williams to thank him.

But back to the beginning of the Club in 1947. The Club now plays a number of competitions within the Club. The Club is a social bowls club which plays friendlies with other Clubs but is not a member of a Bowling League. There are now Competitions with Trophies awarded at the annual Presentation Lunch in October.

At that very first AGM (1947) it is recorded that the Championship was to be played in June. It was described as the Ladies Championship so presumably it had been played at the previous Club. Since 1975 the competition has been played all on the same day, but this has not always been the case as in 1950 it was recorded that the Championship should be played on similar lines to the last season starting in early June with three weeks between each round, with semi-finals and finals in early September.

Over the years there are various comments relating to the competition. In 1959 it was agreed that members who had not paid subscriptions by the due date would not be entitled to play in the club championship. In 1963 that once the first round of matches had been played, as long as there were no more than 5 jacks on the Green at any one-time, others could play a friendly.

The Club Championship has caused some upset over the years. It started in 1981 when it was noted that the Club Championship Cup no longer had enough space on it for the winner’s name to be engraved. The cost of the Shield to be fixed to the plinth and the cost of repairs of the plinth was discussed and they also explored the possibility of a metal band being placed round the base of the Cup upon which the winner’s name could be engraved. The outcome, however, was for future winners to hold the cup for one year and be presented with a small shield engraved with Club name and date which they could keep. The cost would be paid for through the entry fee to the competition.

This arrangement continued for the next few years until 1985 when it was raised again, and the Treasurer was asked to enquire about the cost and possibility of obtaining a Shield to be engraved each year with the Club Championship winner. Nothing is noted about the outcome of this but at the AGM of 1987 it caused uproar.

‘One of our members brought up the question as to why a band could not be put on to Club Championship Cup, this had been discussed eight years ago, we were told then the cup was not worth spending money on it, however after heated discussions and all members joined in, the whole place was in uproar, our new President tried her best to restore order, but her pleas fell on deaf ears, so meeting was brought to an abrupt end….Before the fracas started, one member suggested we have new committee members.… B Hughes tried at end of meeting to welcome new President and thank retiring one also all officers but it is doubtful whether anyone heard, as she also like the President could not be heard above the shouting which was still going on, meeting was brought to an abrupt end, without the usual formalities’.

The outcome of all this, as noted by the secretary in her report of 1987, was that all had agreed to buy a new Shield or Cup at a cost of £38 plus engraving. As there was just about enough funds a new Trophy was purchased. 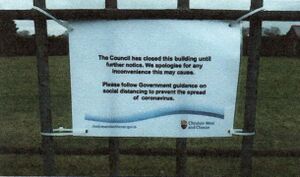 Post lockdown the Club is looking forward to resuming its activities every Tuesday afternoon during the bowling season on Green No.3 at Panton Road, and celebrating its 65th Anniversary in 2022.

Retrieved from ‘https://www.hoolehistoryheritagesociety.org.uk/w/index.php?title=Hoole_Ladies_Bowling_Club&oldid=1772’
Cookies help us deliver our services. By using our services, you agree to our use of cookies.