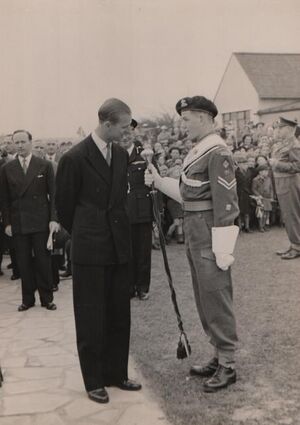 The Chairman's Annual Reports summarise the activities of the Society since its inception and can provide a source of information for areas not yet covered in other parts of the web-site and can be accessed by clicking on the link for each year.

A record of Chairman's Annual Reports can be found:

The photograph shows the current Chairman of the Society, Ralph Earlam (then the drum major of Hoole Army Cadet Force Band), being quizzed by Prince Philip when he opened Hoole Coronation Playing Field on 29th April 1953.

The land has been used for recreational purposes since the Royal Agricultural Show was held in this part of Hoole in 1893.

Hoole Cricket Club's pitch was here with its own pavilion, which was to become the headquarters of Hoole British Legion. There were also tennis courts by Park Drive South, and in the 1950's a hut for Hoole's Army Cadet Force was built in the same area.

The pavilion in the background (demolished in 2021) was the William Brown Pavilion, named after a long serving councillor with Hoole U.D.C.

Standing smartly to attention is Major Harry Pleavin, commandant of Hoole Army Cadet Force and a Hoole U.D.C. councillor; the gentleman in the dark suit was Viscount Leverhulme, Lord Lieutenant of Cheshire. The gateposts to the playing field still carry commemorative plaques.

Retrieved from ‘https://www.hoolehistoryheritagesociety.org.uk/w/index.php?title=Chairman%27s_Annual_Reports&oldid=1803’
Cookies help us deliver our services. By using our services, you agree to our use of cookies.